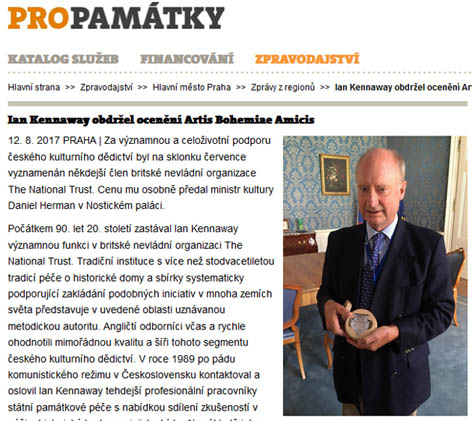 "At the end of July 2017 Ian Kennaway received an award for his significant and lifelong support of the Czech cultural heritage. The prize was presented in person by the Minister of Culture Daniel Herman in the Nostic Palace.

In the early 1990s Ian Kennaway held a prominent role in the British NGO The National Trust. This over-120-year-old institution has a tradition of caring for historic buildings and collections, and of systematically supporting the establishment of similar initiatives in many countries around the world. The NT is a recognised methodological authority in the area.

British experts quickly evaluated the extraordinary quality and breadth of the Czech cultural heritage. In 1989, after the collapse of the Communist regime in Czechoslovakia, Ian Kennaway contacted professional staff in charge of the State-run National Heritage Insitute with the offer of sharing experience in the care of historical buildings and their collections. Based on his initiative, a number of Czech specialist traineeships were organised in Great Britain, contacts with professional circles on the western side of the Iron Curtain were established, which gave rise to a new approach to the historical presentation of State-owned castles and châteaux in Czechoslovakia, and later in the Czech Republic. There has also been a change in approach to the everyday care of historic houses and their furniture. Exceptional professional help, supported by intensive peer-to-peer, multi-disciplinary dialogue, has allowed our sites to achieve a comparable and valued level internationally.

Equally significant is Ian Kennaway’s long-term personal interest in the specific anad real support of Czech monuments, especially in expanding the opportunities of communicating and spreading information, educational programmes, knowledge and experience not only in the field of immovable monuments and collections, but also in the care of historical gardens and parks. In 2007, he crowned his efforts with a great personal involvement, by establishing together with Barbara Peacock The Friends of Czech Heritage, the patron of which is the world-famous architect Eva Jiřičná.  Especially thanks to the charity's foundation, there are now other possibilities of systematic financial support for Czech monuments. With appropriate knowledge and expertise of our (Czech) heritage fund, and in cooperation with other experts, the assistance is focused namely on smaller, often neglected and endangered examples of cultural heritage. Ian Kennaway also deserves significant credit for the regular working holidays that provide the rescue and maintenance of specific monuments by volunteers from the United Kingdom. The Artis Bohemiae Amicis Medal, in translation ‘for the Friends of Bohemian Art’, is the award from the Ministry of Culture that since 2000 has honoured individuals who have purposefully contributed or are contributing to spreading the good name of Czech culture both at home and abroad.

Further details on Artis Bohemiae Amicis can be found on the website pages of the Czech Ministry of Culture." www-old.mkcr.cz/ministerstvo/oceneni-artis-bohemiae-amicis/default.htm

Progress at the Château of Uherčice in South Moravia

Lecture 30/11/21 by Martyn Bond: 'A Castle in Bohemia, an Austro-Japanese Count, and the Future of Europe'

By accepting you will be accessing a service provided by a third-party external to https://www.czechfriends.net/

Member of the British Chamber of Commerce in the Czech Republic